How to get your iOS app approved by Apple?

Fun fact: back in 2007, when Apple presented their first iPhone, company’s CEO, Steve Jobs, was against the idea of native third-party applications running on iPhone.

His point was that “iOS developers have everything they need if they know how to write mobile applications using the most modern web standards”. So, basically, the idea was that all iOS applications from third-party developers should use built-in web-browser in order to run.

Apple just can’t do anything ordinary, can they? At first, there are no native third-party applications at all, and now their App Store has the toughest moderation of all digital distribution services on the market.

Yes, it really helps to improve iOS security level, but also adds lots of headache to iOS developers. It is really difficult to find an application that won’t get approval in Google Play.

Sadly, you can’t say the same about App Store – the variety of rejected iOS apps is much wider. Today we will talk about how to get your native iOS application approved and minimize your app review time.

What iOS apps get rejected?

App store moderators reject all the fraud apps out there. Luckily, we don’t work with clients who use fraud schemes in their mobile (and any other) applications.

Constant full-screen ads, external code download, noticeable difference between application’s description and content – if your application matches any of those, it’s gonna be rejected without any doubt.

Of course, no one is perfect – sometimes you can find some really doubtful applications in the App Store, but none of them stays for too long. Usually, those apps are just using similar names to popular apps and they won’t cause any harm to your device. But still, they are useless.

Generally, the reasons for your application rejection are much more common. In case your application was rejected because of any minor reasons, your team can always fix everything and request a second review (but as we all know, time is the biggest enemy). Here is the list of the most “popular” App Store rejection reasons. 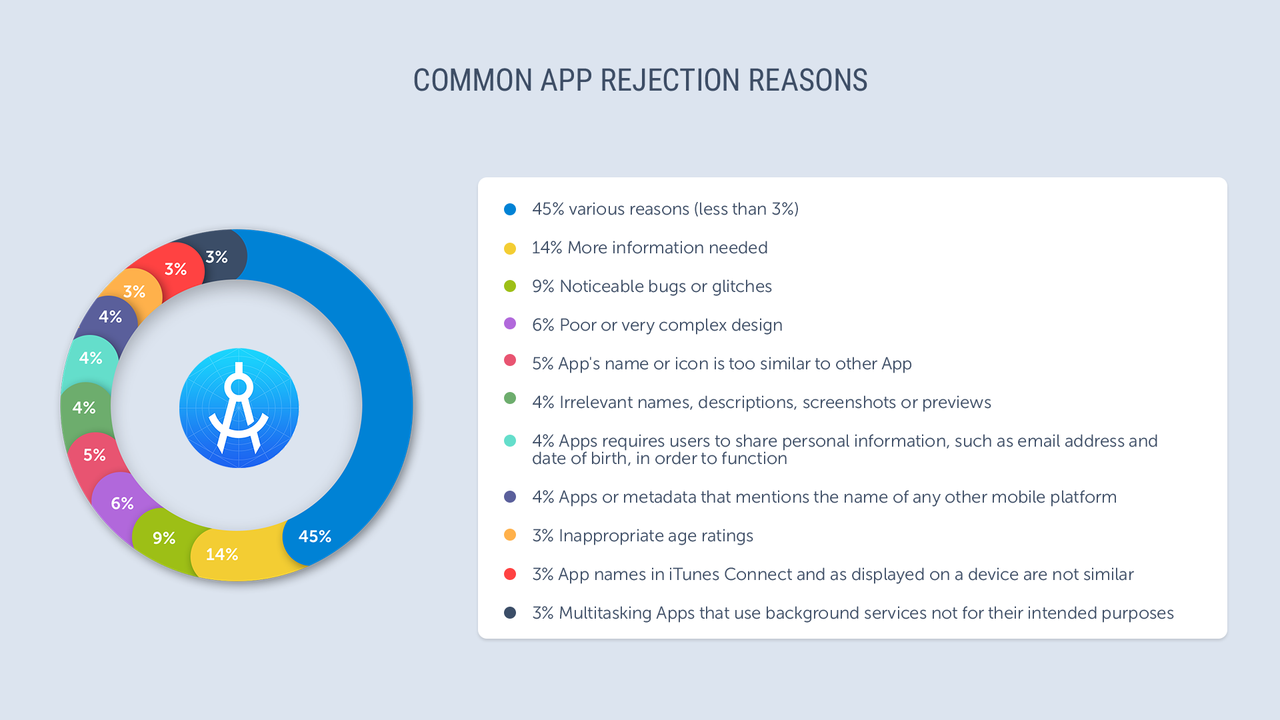 How to increase your app’s approval chances

Sure, the most obvious way to get your app approved is to look at these rejection reasons and cross out each of them (as if you’re using shopping list), but there are some points that should be considered very carefully:

What if my app gets rejected?

App rejection can become a true catastrophe if you are short on time – iOS application review can take much longer than average (approximately 1 week). But if your app got rejected, do your very best to get approval on the second attempt.

Inspect your app rejection reasons really thoroughly, spare no expenses or time on your application quality assurance – another rejection may cost you much more than QA expenses. For example, the case when you are really short on time – you have to publish your app, or otherwise, your competitors will do it first.

But don’t get obsessed with issues listed in Apple’s rejection letter – there might be other problems that are not on the list. If moderator stumbles upon critical bug on application’s launch, be sure – he won’t go any further.

It’s rather a common situation when iOS development team fixes all the bugs and a few weeks later they still get rejected by Apple. So it becomes rather obvious – it’s always better to overdo something, especially when we are talking about quality assurance.

Smartum team provides iOS application development services for 5+ years and we’ll be happy to help you with your ideas, no matter what platform you choose.

How to get your iOS app approved by Apple?
5 (100%) 2 votes
Check out some other posts
CRM in Travel industry: What problems CRM solves in travel companies?
Come visit us in Belarus without visa
Why should start CRM software development? CRM benefits and use cases
Using RabbitMQ in building the system of leads generation
Where and how to employ eLearning software solutions?
SCORM in eLearning course and application development
Smartum Workflow
What to choose for custom iOS app development – Objective-C or Swift?
6 key roles in a software development team
×
×
DESCRIBE YOUR PROJECT OR IDEA AND
WE WILL CONTACT YOU WITHIN A DAY