Hard to choose. Which platform should you pick for mobile application development?

Despite the fact that today you can name at least dozen of mobile operating systems, we will talk about two most popular ones (by the way, both of them were developed in California), which summarily hold more than 80% of the market share – iOS by Apple and Android by Google.

The smartphone market continues to grow each year at an enormous rate and Google has managed to take an advantage of the situation due to the huge growth of developing countries’ mobile markets. 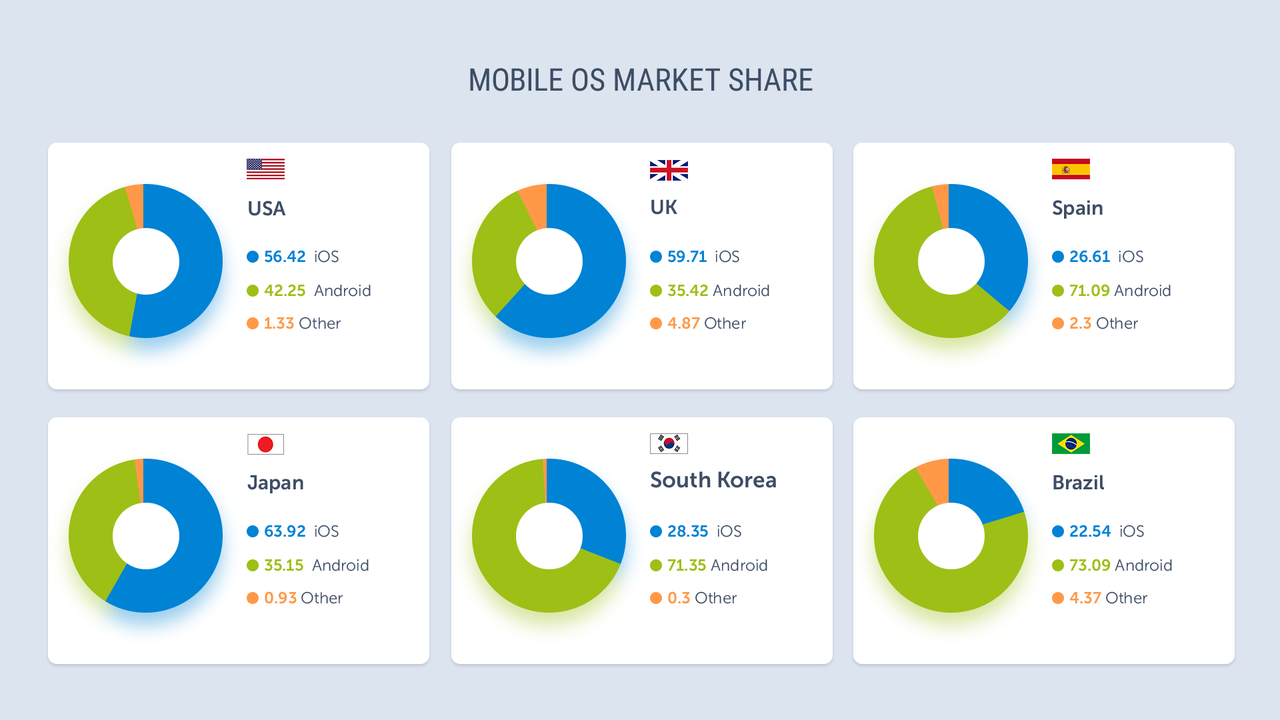 Sure, first of all, you should do your research and understand the most important thing – who is your target audience? If you’re absolutely sure that your audience uses only iOS-running devices, then it’s rather obvious, that bringing your app to Android is pointless (even if you really want to).

But what if your target audience consists of both Android and iOS users? Should you launch your app on both platforms, or one is enough? So, let’s talk about the pros and cons of iOS and Android application development.

Word “popular” isn’t enough when you want to describe Android’s popularity. Even Apple’s market share looks really tiny when compared to Android’s monstrous 70%. What does it mean?

Well, nothing much… Just that 7 out of 10 smart device owners use an Android-based device! If you choose native Android development, you automatically choose much bigger audience: Google’s OS is used not only in smartphones but also in cars, book readers, TVs, media players and many other things related to the internet of things.

Finally, Google has managed to develop its own design guidelines (also known as Material Design). Now you can easily build your own beautiful designs which can be easily used in native Android development. Well, at least while your development team is going to follow those guidelines, as they are not mandatory.

Google has made another step towards all Android developers out there. Yes, we’re talking about Android Studio IDE, which is actually based on IntelliJ Idea.

Android Studio itself is a very powerful IDE (faster and more convenient than all previous solutions on the market), which gave a huge boost to all Android software developers.

What does it mean for the client? Less time for development, more money saved. Especially when we’re talking about custom Android app development. Nothing more, nothing less.

By the way, ever since its early builds, Android was far more customizable. It’s much easier to add various additional functionality when developing an app for Android.

Widgets, system add-ons, integration with other apps/services, etc. The system itself doesn’t block any of your ideas! Well, most of them.

Now it’s time to talk about some issues that your team may face during the development cycle (some agencies that provide Android application development services prefer not to talk about it). One of them – massive fragmentation.

Hundreds and thousands of devices with different hardware running different Android versions. The more devices you have, the more time and money you need for testing and polishing of your app.

Actually, today this issue isn’t as big as it was before – more than 70% of Android devices are running on 4.4 KitKat (or newer). But still, there is an issue with an issue. There are many manufacturers out there which prefer making their own Android variation.

Most popular ones are TouchWiz by Samsung, Sense by HTC, Miui by Xiaomi, etc. Each of those has its own features and often is heavily modified by its developer. It may be a serious issue for less skilled teams providing Android application development services (luckily, not us).

Even though Android audience is 2-3 times bigger than an iOS audience, iOS apps generally get much bigger revenue (especially speaking about iPhone application development).

It’s a fact – iOS users like to spend money (on good apps, of course). Sure, the situation has changed slightly over a few past years, but still, Apple has higher ARPU (average revenue per user) – 3-5 times higher (Android compensates this with a bigger audience).

Commonly, iOS stands for luxury. So, if you’re aiming for premium segment, you should start with an iPhone applications development.

While we are on the subject, Apple also has much lesser device pool than Android does. Thanks to that, your developer team knows everything about the devices it’s going to work with from the start (for example, iPhone application development is limited to 4-5 types of screen resolution).

It’s crystal clear that working with a dozen devices is much easier, than trying to work with thousands of different gadgets. By the way, Apple has a rather big market share on the tablet market as well – about 25%.

Still, Apple has its problems, too. For example, App Store moderation (a real headache for agencies providing iOS application development services). If you will not strictly follow Apple’s guidelines, you can easily get old while waiting for your app’s approval.

Of course, we are joking, but you should keep in mind that because of all those moderation cycles, you may end up waiting for weeks or months (while it takes a couple of hours for Google to approve your app) – Apple is simply obsessed with user’s safety while using App Store. Consider that when choosing iOS application development services.

Some say “Don’t put all your eggs in one basket”. Not in this case, though. Sometimes it’s better to evaluate the risk. Launch your app on one platform, analyze the result. If the launch was successful, you should try out the second platform.

No one is 100% safe from making mistakes. Still, it will be more painful for your budget if your app won’t succeed on both platforms, rather than on single one. There are exceptions though. If everybody is well aware of your brand, launching on both platforms will surely grant you a larger audience.

But in the end, the choice is up to you. And we’ll be here to provide with best iOS and Android application development services possible!

Hard to choose. Which platform should you pick for mobile application development?
4.5 (90%) 4 votes
Check out some other posts
CRM in Travel industry: What problems CRM solves in travel companies?
Come visit us in Belarus without visa
Why should start CRM software development? CRM benefits and use cases
Using RabbitMQ in building the system of leads generation
Where and how to employ eLearning software solutions?
SCORM in eLearning course and application development
Smartum Workflow
What to choose for custom iOS app development – Objective-C or Swift?
6 key roles in a software development team
×
×
DESCRIBE YOUR PROJECT OR IDEA AND
WE WILL CONTACT YOU WITHIN A DAY